The hostility of the U.S. Army to Christian freedom continues, as atheist complainers have succeeded in forcing the removal of Christian crosses from a base chapel.

Fox News confirms:  “The U.S. military ordered soldiers to remove a cross and a steeple from atop a chapel and to board up cross-shaped windows at a remote American forward operating base in Afghanistan.

“The removal of Christian symbols from the chapel at Forward Operating Base Orgun-E came after a solider complained — leading American Atheists president David Silverman to send a letter to the Pentagon.

“Under this [Obama] Administration, the military has become a Christianity-free zone,” said Tony Perkins of the Family Research Council.  “As a veteran, there’s an irony here. You put on the uniform to defend freedom — chief among them is freedom of religion. And yet, you are stripped of your own freedom to practice your faith.“

[Dr. Chaps’ comment:  MILITARY CHAPEL BUILDINGS ARE NOW DESECRATED by homosexual “wedding” ceremonies in all 50 states.  Please help me take action to defend military chapels by signing our petition, and we will blast fax all 535 Congressmen and Senators…]

When Obama signed the National Defense Authorization Act for 2013, which includes the provisions, he blasted both Congress and chaplains, WND reports.

“Section 533 is an unnecessary and ill-advised provision, as the military already appropriately protects the freedom of conscience of chaplains and service members,” Obama wrote in a signing statement that accompanied the legislation, saying he would not pay much attention to it.

“My administration remains fully committed to continuing the successful implementation of the repeal of Don’t Ask, Don’t Tell, and to protecting the rights of gay and lesbian service members; Section 533 will not alter that,” Obama declared, saying he would make certain the conscience protections do not produce any discriminatory results [against gays].

“The Secretary of Defense will ensure that the implementing regulations do not permit or condone discriminatory actions that compromise good order and discipline or otherwise violate military codes of conduct,” Obama wrote.

Dr. Chaps comments:  In other words, Obama will defend homose xuals from discrimination, but Obama will ignore enforcement of the new law we just made him sign protecting chaplains, and instead protect homose xual aggressors.

Friends, these statements are shocking.  Revealing how Obama loves sin more than Christ, and will continue to allow persecution of Christian chaplains, despite the law.   Thankfully he didn’t veto our provisions (as he once threatened), and at least on paper if not yet in reality, Chaplains have freedom to preach against sin, THANKS TO YOUR FAXES TO CONGRESS.

Now let’s inform the NEW Congress that we want the same protections, not only for chaplains, but also for military chapels (which are not yet protected, and face daily desecration by sod omite acts on the Christian altars.)

2,000 Chaplains petition 26 Senators to protect freedom.  Will you join them?

2,000+ Military Chaplains are petitioning these 26 Senators through their bishops, to protect religious freedom and stop sod omite desecration of military chapels, ADF reports.

“The Chaplain Alliance for Religious Liberty, an organization of chaplain endorsers, calls on the U.S. Congress to protect the conscience of our military personnel in the wake of the Senate’s refusal so far to pass such protections.

“Earlier this year, in Section 536 of H.R. 4310, the House passed language protecting the rights of conscience of members of the armed forces, including chaplains. The House also passed language in Section 537 of H.R. 4310 that ensures military chapels are not used for any marriage or marriage-like ceremonies involving anything other than the union of one man and one woman. The Senate removed both of these sections when it passed its version of the National Defense Authorization Act.

“No American, especially those who wear the uniform, should be required to give up their religious values,” said Chaplain (COL) Ron Crews, USAR retired, executive director of the Chaplain Alliance for Religious Liberty. ‘Men and women who courageously serve in our armed forces should be able to serve without having to violate their consciences. Service members, including chaplains, who have sincerely held religious beliefs or moral convictions need to be able to serve without fear of recrimination against their values.’

“The National Defense Authorization Act is currently in conference committee.

“‘Americans concerned about protecting the rights of conscience of our service members should contact their senators and encourage them to agree with the language passed by the House of Representatives,’ Crews said.”

Don’t have time to make 87 phone calls? You can fax all 87 members instantly, just…

Obama desecrates Military Chapels in all 50 states.  Can 2 Senators stop him?

An amazing article by our friends at Last Resistance quotes me and asks the question I’ve been raising for a year now. Can Senate Republicans save military chaplains from court-martial, if they refuse to facilitate homose xual “marriage” ceremonies?

In response to YOUR faxes, two Senators Roger Wicker (R-MS) and my friend James Inhofe (R-OK) have just introduced new legislation in the Senate, as “The Military Religious Freedom Act.”  I met with Wicker’s staff this summer, and they received my suggestion clearly, since the new bill mirrors the two good amendments already passed by the House, and protects both military chaplains AND chapels from desecration. 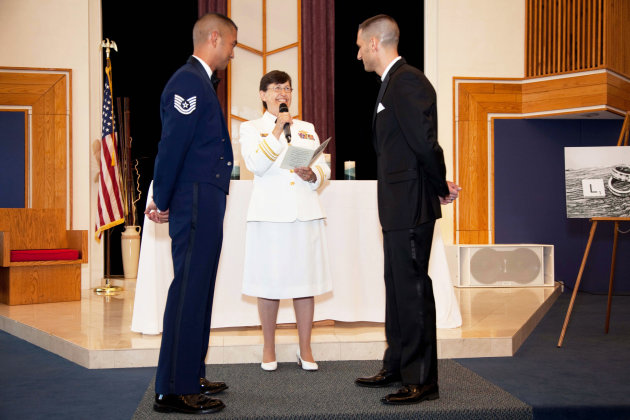 This “wedding” in New Jersey is President Obama’s latest assault on military Christians, after homose xual ceremonies have already desecrated chapels in Florida and Lousiana.

All three states ban homose xual “marriage” so why do reporters lie for Obama, claiming these ceremonies are only authorized in states where gay marriage is licensed?

This is proof that what I said is true, that Obama has forced homose xual “marriage” upon all 50 states. AP reports Obama’s policy: “Under current policy, these ceremonies are allowed on bases where the marriage or civil union is legal under state law.”

In other words, not only does Obama abrogate federal law, the 1996 Defense of Marriage Act (which applies on federal land, i.e. military bases), but he also abrogates the state laws of New Jersey, Florida, and Lousiana, which clearly prohibit homose xual “marriage.”

Let’s stand with Senators Wicker and Inhofe, to demand all 100 Senators protect chapels.

President Obama trampled on Louisiana state law, and desecrated the Christian chapel on a military post at Fort Polk, Louisiana, by authorizing the first homose xual ‘wedding’ ceremony by a lesbian couple in a military chapel. Flaunting his federal power over Louisiana (whose law clearly defines Marriage = 1 Man + 1 Woman), and ignoring the 1996 Defense of Marriage Act, Obama’s Pentagon lawyer Jeh Johnson issued a memo this year forcing all military chapels in all 50 states to be open for ‘gay’ weddings.

Now we learn that three weeks ago, a lesbian couple was secretly ‘married’ upon, anddesecrated the Christian altar in the base chapel with sod omy, marking the first reported homosexual wedding in a military chapel ever.  A pro-homose xual chaplain presided at the ‘marriage-like religious ceremony’ of two lesbian soldiers, but did not issue a license,making the union illegal in the eyes of both Lousiana law, and the laws of Almighty God.

Congressman John Fleming, M.D. (R-LA) told CNSNews.com on Wednesday that “the U.S. Army had confirmed to him that the chaplain had performed the ceremony less than a month ago in the base chapel at Fort Polk, which is in Fleming’s district.”

“It is my understanding that this is the first ceremony of its type on an American military base and that is, as it’s reported, it was a wedding ceremony between two members of the same gender who are uniformed members of the Army,” Fleming said.

Congressman Todd Akin (R-MO), said this confirms the need for the Senate to pass two good pro-chaplain amendments protecting chapels and chaplains free speech:  “It is very concerning that a same-sex ceremony would occur on a military base in a state where the definition of marriage has been clearly defined as between one man and one woman,” Akin said. “This action is clearly in contravention of state law, and also violates the Defense Department policies issued last fall. This appears to be a case where political agenda has trumped the rule of law, which is absolutely unacceptable. This confirms the importance of the language that my colleagues and I worked to include in the House-passed National Defense Authorization Act for 2013, which would protect chaplains and servicemembers from this liberal agenda. The same individuals who will violate the law to advance their agenda will persecute those around them who disagree with their views.”

“Congressman Akin has led the efforts to protect traditional marriage on military bases. In 2011, Congressman Akin offered an amendment to H.R. 1540 which was stripped by the Senate. In May 2012, Akin offered an amendment to the National Defense Authorization Act for 2013 which would protect servicemembers and chaplains from recriminations based on their concerns regarding same-sex marriage.”

[Dr. Chaps’ comment:  Folks, I have been repeatedly saying for months, what nobody believed was true, that military chapels both Catholic and Protestant will be desecrated in all 50 states by acts of sod omy on the Christian altar, robbing all our troops of their right to a sacred worship space.  Any chaplain who objects will be punished, and the keys to his chapel must be turned over to homose xual activists.  Does anybody doubt that my warning has now come true?]

We must take action to protect our chapels.  Please sign our petition to all 100 Senators.